Do You Text and Drive? Read This Not to Regret

Let us start with a story, though a sad one, it will help us realize the root of this writing. A teenager from Kansas was driving her pickup truck. Suddenly the truck crashed and flipped over when she was texting while driving. The hard-to-swallow fact is that she typed a single letter text when the mishap occurred. The entire text was ‘k’ which was never sent. The girl was severely injured and died a few days later.

Do you text and drive? This story is definitely for you to understand the gravity of distracted driving, especially texting and driving. It may sound like a five-second task to text when driving, but in those five valuable seconds, you will travel the length of a football field, even if you drive at 55 miles speed.

A recent survey suggests that the number of smartphone users in the U.S in 2021 was 298 million, and in 2022 it is estimated to reach 301.65 million. Now you would have understood how badly text and drive crashes can happen.

Around 660,000 drivers are believed to be on their phones at any given time during the day. Statistics for texting and driving shows that it causes 1,600,000 accidents and 330,000 injuries per year in the United States. Pedestrians, bicyclists, and motorcyclists are reported to be the common victims in text and drive crashes.

Three out of four individuals are overconfident and believe that they are above-average drivers. Even when texting and driving, they feel everything is under their control. They think it’s a waste of time to stop and check the phone for the messages or emails.

You might be thinking about why texting while driving is dangerous. When you text and drive, your attention is split or entirely diverted. When your eyes are taken away from the road, it’s as if you’re driving blindfolded. You could lose control of your vehicle in a fraction of a second and be involved in a devastating crash.

There are three sorts of distractions in texting and driving accidents. The following is a list of them. 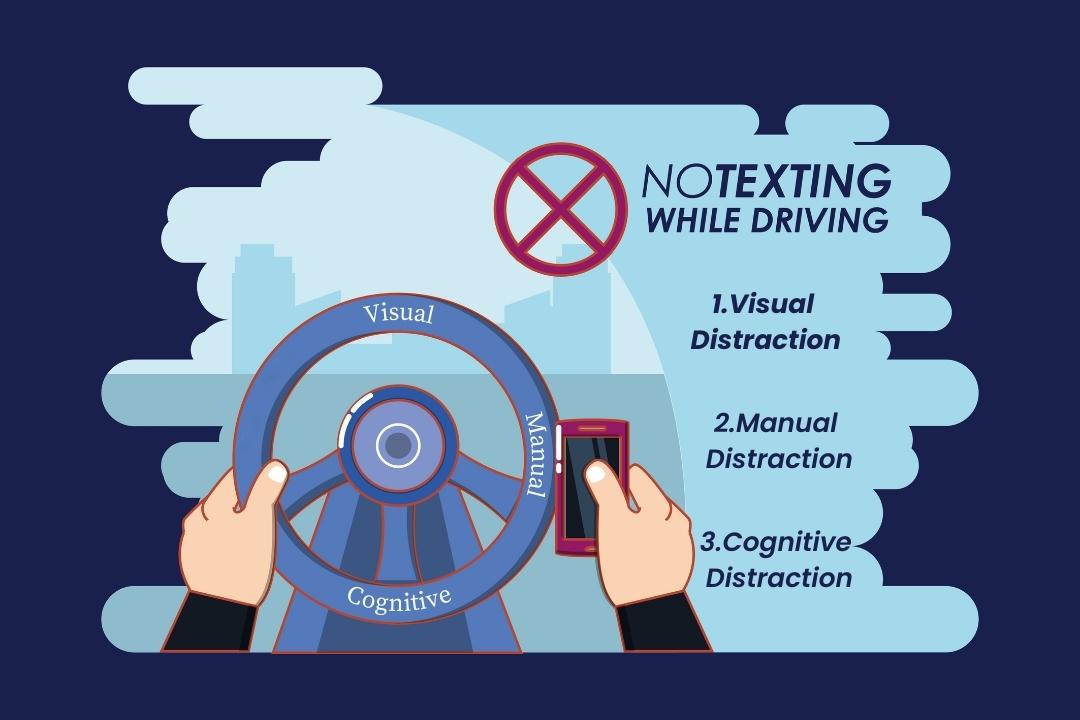 Manual distraction occurs when the driver takes his hands off the wheel for any reason. To text, while driving, the driver must have a grip on the phone that removes his hands from the steering wheel.

Text and Drive vs. Teens

Teen drivers are more likely to be engaged in texting and driving incidents, making it the #1 driving distraction in teenagers. According to text and drive statistics, 21% of teenage drivers involved in fatal accidents were texting while driving. The disturbing data is that 11 teen deaths occur every day due to text and drive cases, whereas eight teen deaths a day occur due to DUI-related crashes. Text and drive statistics by CDC reports that, in 2019, texting or emailing while driving was prevalent in older teens compared to younger teens.

According to psychological studies and polls, teen drivers are unaware of texting and driving dangers. The thrill or temptation to text outweighs the risk of being involved in an accident. They have an overabundance of confidence in their ability to text and drive simultaneously.

Many states in the U.S. have made it unlawful for teenagers to drive while using handheld electronic devices. Some states have enacted harsh punishments for texting while driving, including substantial fines, driver’s license suspension, increased vehicle insurance premiums, and even jail time.

What does the Law say About Texting and Driving?

Is it illegal to text and drive in the U.S.? Texting while driving is illegal for all drivers in 48 states and the District of Columbia, except Montana. Drivers who violate the laws and risk the lives of others would be held reliable. As per the text and drive law, the driver could face weighty fines, jail time, and license suspension for injuring someone while texting and driving.

Different laws manage the text and drive laws in each state. The Massachusetts Safe Driving Law came into effect in September 2010, making it illegal to drive while distracted by a mobile device. It is unlawful to send, read, or write text messages or emails while driving. Police can pull over automobiles when texting and driving are noted under Florida Statute Section 316.305. Distracted driving laws in Connecticut impose a $125 fine for a first-time text and drive ticket; For the second offense, it costs $250. In Georgia, first-time texting and driving would leave a maximum fine of $50. If the driver commits a second-time text and drive within two years of the first offense, a fine of up to $100 may be charged. For a third occurrence, the penalty would be up to $150.

It should be noted that the penalties for texting and driving infractions in any jurisdiction do not bar an accident victim from suing the irresponsible driver. Aside from the penalties, the driver should compensate the claimant for the losses he or she has suffered.

How to Sue for Texting While Driving?

If you or a loved one has been harmed in a car accident caused by a texting driver, you can hire an injury lawyer to help you file a personal injury claim. A lawyer can assist you in evaluating the situation and determining whether or not you should pursue an injury case. If the driver was texting while driving, the victims in Florida could make a lawsuit under the doctrine of “negligence per se.”

Once the lawsuit is filed, your attorney would issue subpoenas to the defendant parties, including even the network providers of the negligent driver. There is a risk that the defendant will claim that texting while driving was not the cause of the accident. In this case, the claimant must prove that the defendant was sending or receiving a text message at or near the time of the collision. To prove the assertion, the defendant’s cell phone data might be gathered to show that texting was a contributing cause in the accident. Traffic cameras might possibly capture the moment when a driver was texting and caused an accident.

Did you text someone knowing that he/she was behind the wheels? You might share the liability in some circumstances if the individual had ended up crashing someone. In such cases, you may be testified to collect evidence on texting and driving of the defendant.

Damages covered for compensation in a texting and driving lawsuit include medical expenses, loss of income, lost wages, pain and suffering, loss of enjoyment in life, loss of consortium, property damage, wrongful death, etc. In some cases, an additional amount may also be awarded to the claimant for punitive damages if the defendant is proved to be negligent. If the defendant’s insurance carrier comes up with a deserving settlement, it would be easy for the claimant to settle the claim outside the court. If the defendant is not ready to pay a decent compensation to meet the crunching financial expenses of the victim, the case will proceed towards trial.

How to Avoid Texting and Driving?

Driving while texting is six times more likely to result in an accident than driving when drunk. It’s the time to take a pledge that you will never text and drive. Educate your peers and family about the danger and the legal consequences of texting and drive. Be a responsible driver and keep in mind that no text is more important than a life. Even if you are a passenger, stop your driver from texting and driving. Many mobile phone service providers are starting to offer services that disable phones whenever the device’s inbuilt GPS detects that it is in motion.

I want to end my thought by sharing the quote, “Don’t tempt fate; that text can wait.” Instilling safe driving habits would make your journeys enjoyable and safe for others on the road.

Drafting a Precise Deposition Summary: 7 Facts You Must Know

How Your Pain Scale Value Can Impact Your Personal Injury Claim?