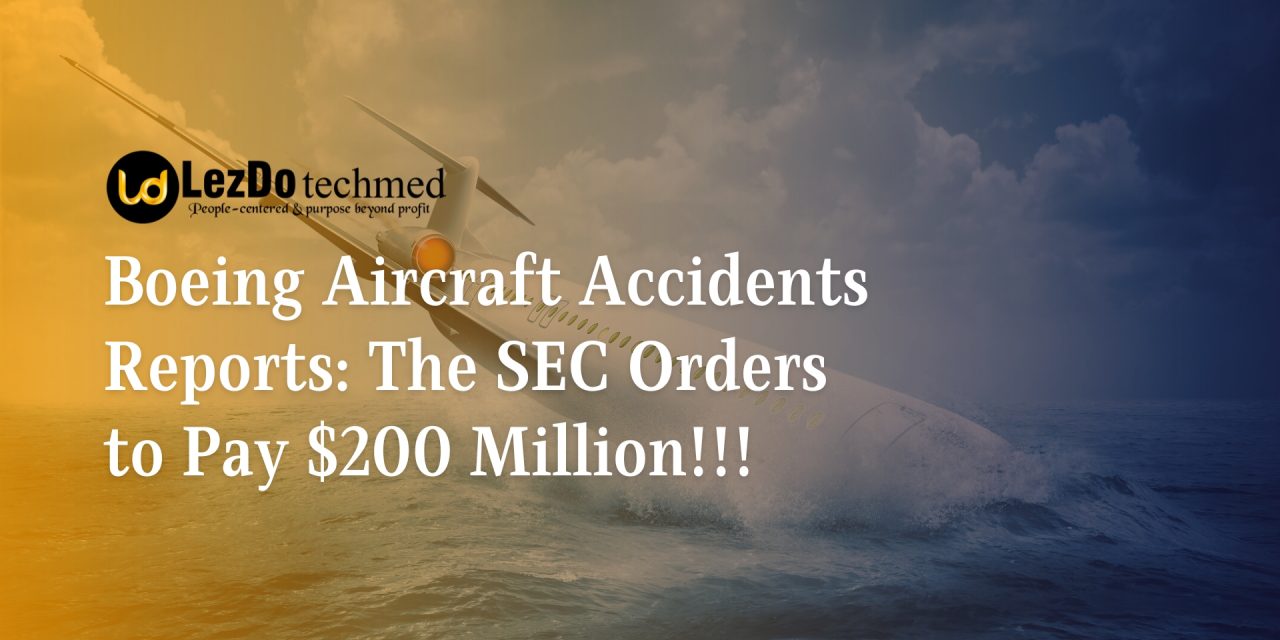 I am sure you have been seeing umpteen taglines like these on all the news reporting platforms.

Let’s understand what’s happening with Boeing and dig into the trending news on Boeing aircraft accidents reports. Before that shall we get to know 737 MAX?

Announced on August 30, 2011, Spirit Aerosystems in Wichita, Kansas, Boeing finished assembling the first 737 MAX fuselage for a test aircraft on August 13, 2015. The first 737 MAX, a MAX 8 dubbed Spirit of Renton, was unveiled at the Boeing Renton Factory on December 8, 2015.

The opening flight took place on January 29, 2016, at Renton Municipal Airport, and was certified by the United States Federal Aviation Administration (FAA) on March 8, 2017.

Having a basic understanding of Boeing 737 MAX, let’s find an answer to the blog title.

Why did the SEC drop a $200-million fine on Boeing Co? By the way who is the SEC, and why should Boeing pay a fine to them?

The SEC is an independent federal government regulatory agency that encourages complete public disclosure, and defends investors from dishonest and market-manipulating techniques. The SEC keeps an eye on corporate takeover activities in the United States.

It collaborates with the Justice Department on criminal cases and has the authority to pursue civil lawsuits against law violators. The mission of the SEC is as follows.

The Securities and Exchange Commission demands the companies that sell securities to the public be honest about their operations, the securities they sell, and the risks associated with doing so. Brokers, dealers, and exchanges that sell and trade securities must treat investors fairly and honestly.

Not just connected with the Boeing issue, the SEC is also flashing in some other news this week.

The SEC has fined Oracle $23 million for bribing officials in India, Turkey, and UAE for violating the Foreign Corrupt Practices Act. Oracle was proved to use an excessive discount scheme in connection with a transaction with a transportation company owned by the ministry of railways.

Now you would have understood the functioning of the SEC in a better way, and we would move to the allegations against Boeing 737 MAX.

Let’s fly with Lion Air Flight 610 and Ethiopian Airlines Flight 302, the two aircraft that made Boeing the matter of discussion in this blog.

The aircraft involved in the crash was a Boeing 737 MAX 8, registration PK-LQP, line number 705, leased from China Minsheng Investment Group (CMIG) Aviation Capital. The aircraft was then delivered to Lion Air.

At 6:33 a.m., communication between Flight 610 and air traffic control (ATC) was abruptly lost. It crashed into the sea less than 13 minutes later take-off, killing all 189 passengers and crew on board.

34 kilometers (18 nautical miles) off the coast of Java was where the accident occurred. It had the highest death toll of any accident or incident involving any Boeing 737 series aircraft.

The MAX series’ Maneuvering Characteristics Augmentation System (MCAS) was found to have a design flaw that caused serious flight control issues that traumatized passengers and crew on the aircraft’s previous flight, as well as indications of failures of an angle of attack (AoA) sensor and other instruments on that and prior flights.

In collaboration with the Indonesian Air Force, Indonesian Navy, and the Republic of Singapore Navy, Indonesia’s National Search and Rescue Agency (Basarnas) began a search and rescue operation. About 150 people were sent by Basarnas in boats and helicopters to the disaster scene.

The first victim was identified on October 31 with more than a dozen body parts drifted more than 5 km in the sea current. Hundreds of pieces of the aircraft were also reported to be recovered.

Some abnormalities were identified in the aircraft’s altitude and airspeed. The Boeing aircraft accident reports also pointed out to numerous technical glitches in the aircraft, leaving the impression that it was not in a condition for a safe flight.

“We are addressing the KNKT’s safety recommendations and taking actions to enhance the safety of the 737 MAX to prevent the flight control conditions that occurred in this accident from ever happening again. Safety is an enduring value for everyone at Boeing, and the safety of the flying public, our customers, and the crews aboard our airplanes is always our top priority. We value our long-standing partnership with Lion Air and look forward to continuing to work together in the future.”

Indonesia banned Boeing 737 MAX IN 2018, which was later lifted in 2021, following Australia, Japan, India, Malaysia, and Singapore. Several victims’ relatives had filed lawsuits against Boeing for its negligence in providing the passengers with a safe flight despite all the technical errors.

Ethiopian Airlines Flight 302 was an international passenger flight that used to fly from Nairobi, Kenya, to Addis Ababa Bole International Airport in Ethiopia. The Boeing 737 MAX 8 airplane carrying 149 passengers and 8 crew on board crashed in the town of Bishoftu on March 10, 2019.

The aircraft was manufactured in October 2018 and delivered in November 2018. The deadly crash occurred six minutes after take-off from Addis Ababa at 08:38 local time.

Six minutes after take-off, at roughly 08:44 local time, the aircraft vanished from radar screens and crashed. Flight tracking data revealed that the aircraft’s altitude and rate of rising and descent were erratic. The flight crashed in a farm field near the town of Bishoftu, in the woreda district of Gimbichu.

The impact left a crater that was 90 feet (27 m) wide and 120 feet (37 m) long, and the wreckage was driven as deep as 30 feet (9.1 m) into the ground. The scene of personal belongings and body parts scattered around the field was heartbreaking for the people.

Data from the Ethiopian Airlines flight tracking website Flightradar24 indicated that vertical speed was erratic after take-off. Boeing aircraft accidents reports suggest that the pilot had reported difficulty throughout the flight and requested permission to turn around.

The FAA ordered Boeing to make design adjustments in response to the crash due to worries about the aircraft’s functioning. In reaction to the Maneuvering Characteristics Augmentation System design change, Boeing had plans to adjust training requirements and flight crew manuals. Additionally, the MCAS and angle of attack signal were claimed to be improved after the Lion Air tragedy.

The black box data of the aircraft was retrieved, which had an apparent similarity with that of the Lion Air Flight 610 crash. On March 10, 2021, the Ethiopian Civil Aviation Authority (ECAA) announced that the final Boeing aircraft accidents reports would be released without further delay.

The shocking reality that the newest model from the most illustrious jet maker in the world might be inherently hazardous was raised by the second crash of the Boeing 737 MAX.

Families of the 157 victims of the 2019 Ethiopian 737 Max tragedy and Boeing have come to an accord in Chicago, Illinois, where Boeing headquarters is situated.

Boeing has accepted liability for the crash, which would prevent the victims’ relatives from seeking punitive damages via lawsuits. Taking liability would also make it less likely for Boeing’s current or former executives to be called for testimony.

In January 2021, Boeing entered into a deferred prosecution agreement (DPA) with the Department of Justice after being accused of participating in the 737 Max fraud conspiracy.

Boeing will pay a total criminal monetary fine of over $2.5 billion, which is made up of a criminal monetary penalty of $243.6 million, $1.77 billion in compensation payments to Boeing’s 737 MAX airline customers, and the formation of a $500 million fund for the benefit of the 346 passengers who lost their lives in the two Boeing 737 MAX crashes.

However, the victims’ families were unhappy with the agreement as they were not informed about the settlement negotiation between the government and Boeing. They understand that the agreement shields Boeing from criminal prosecution.

As per the Department of Justice, family members of Boeing 737 MAX crashes are not crime victims and the settlement included the maximum compensation. According to them, 326 out of the 346 crash victims’ families have received payments totaling 94 percent of the $500 million fund.

With detailed studies on the disastrous Boeing aircraft crashes in Indonesia and Ethiopia, the SEC had accused Dennis Muilenburg, the former CEO of the aircraft manufacturer.

Boeing is accused of making false claims to the public about the aircraft. As per the SEC, the aircraft manufacturer and its former CEO Dennis Muilenburg refused to reveal the 737 Max plane’s safety problems.

Boeing concealed critical information from shareholders, making materially misleading public claims, which was against the law. According to the company, their aircraft was as safe as any aircraft that had ever flown in the sky. Despite being aware of contradictory evidence, Boeing and its former CEO claimed after the second crash that the certification of the flying controls was valid.

To resolve allegations made by the Securities and Exchange Commission, Boeing agreed to pay $200 million (SEC).

Muilenburg was fired in December 2019—nine months after the second crash. However, he did not admit guilt, but Boeing and Muilenburg proposed to settle and pay fines, including $1 million, for which Muilenburg would be liable.

MCAS, an unreliable computerized flight-control system, has been blamed for both Boeing airplane crashes. The world learned that the airplane had a severe and catastrophic fault following the second disaster.

The aircraft was grounded for 20 months while ongoing investigations, but they were recently cleared to fly again after the company made significant software and training upgrades.

Look at this video to understand everything happening around Boeing 737 MAX in a nutshell.

This year alone, the stock of Boeing has decreased by 31%, which clearly indicates that the company is paying for its negligence. Can Boeing recover?

A disproportionate amount of attention is paid to airplane accidents. Even though they only make up a small portion of transportation accidents, their rarity and drama have a strong hold on our hearts.

Lumbar lordosis straightening: Know the risks and how to overcome

Do you need life care plan for personal injury settlement?

Did You Slip and Fall? Here is Everything You Wanted to Know